Dale Steyn’s bowling figures in the first innings of the on-going Test match against Pakistan in Johannesburg:

What else is left to say about the best bowler on the planet right now?

He likes fishing, horror movies, all the gory stuff, you know. I think it comes out in his bowling sometimes.

“I’m as mad as hell, and I’m not going to take this anymore!”

Where else in the world do you get the opportunity to basically kill someone with two bouncers an over? Or try, legally. 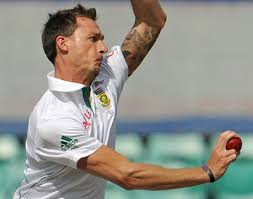 “I’ll get you, my pretty, and your little dog too!”

I just said to him, I am 20ks quicker than he is so he shouldn’t bounce me

“I feel the need—the need for speed!”

Dale Steyn on their tour to India in 2010

“You’ve got to ask yourself one question: ‘Do I feel lucky?’ Well, do ya, punk?”

Keep living on the wild side, Mr Steyn. May the force be with you.